The west coast of Ireland is full of wild and wonderful gems – so its into the West we must go!

Ho horse trekking in Inishowen in Donegal, surf the furious waves on the legendary Mullaghmore beach in Sligo, enjoy a relaxing sunset on the stunning beaches of Inch in Kerry or enjoy the captivating views from the magnificent Cliffs of Moher in Clare. We could go on forever and a day about the endless possibilities on Ireland’s Wild Atlantic Way on the west coast of Ireland. Its next to impossible to choose just one experience but what better place to start than the ever so beautiful County Galway!

Ignoring the inclement summer weather, I went on a road trip Into the West of Ireland with my 10 year old grandson – just the 2 of us. We packed everything in, including the amusement rides in Salthill.   I made a show of myself after a ride on the Ice Jet.  Not a good idea but the grandson loved it!

One of the highlights of the week was our island adventure.  We headed off for 1 night on a trip to Inis Meaín, the Aran’s Middle Island, it is the quietest of the three, located off the West Coast of Clare and Galway and a place to escape the crowds. We caught one of the daily sailings from Rossaveal, (18 km) Co. Galway about 45 minutes journey out on the ferry. You can fly on a small aircraft from Inverin, you are in the air for 7 minutes!   As the sun shone down it felt like a really exotic island adventure. 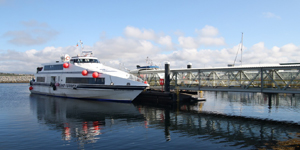 The Ferry from Rossaveal to the Aran Islands

It is a fantastic day trip out for visitors to our properties in West Clare and Galway.  You could not get anymore wild than this!  There are 250 islanders living on Inis Meáin which is a maze of narrow winding roads, bordered by stone walls; sheltered paths and trails criss- cross the island, from the rocky hillsides of the south to the deserted sandy beaches on the north shore. Wild flowers bloom everywhere and numerous examples of early settlements dot the limestone karst landscape. On a clear day, one can even see across to the Cliffs of Moher jutting from the mainland. We decided to take one of the taxis from the little pier where the boat docked to save our legs to explore the island during the day, having booked a B & B for 1 night.  We explored the beautiful beach and picked periwinkles, and even had a swim in the surprisingly warm Atlantic Ocean.  It felt like summer!

We headed off up to the incredible oval fort of Dún Chonchúir, a prehistoric circular stone fort, perfect for a curious 10 year old with an interest in all things ancient.

We passed the church of Mary Immaculate which has magnificent stained glass windows by the famed Harry Clarke Studios.

Opposite the fort, is Teach Synge, the restored island cottage of writer John Millington Synge, for whom the island was a favourite retreat.  Treasa Ni Fatharta, who is the great-great- granddaughter of the islanders in the cottage who welcomed Synge, regaled us with stories of the times gone by on the island.  No need for Wi-Fi and google here – island life came alive with her wonderful stories and photos of visitors to the cottage, including Padraig Pearse.

The sea was irresistible and beckoned, so after another swim, we strolled past the island pub and I enjoyed a glass of Guinness in the sunny outdoor area.  Apparently there are great music sessions here regularly frequented by the regular summer visitors and local alike.

We took the ferry next day to Inis Oirr, the tiniest of the islands to complete the adventure and explored it on one of the horse drawn carts.  Another lovely island, a little busier than Inis Meáin.  As we boarded the boat to head back to Rossaveal that evening, Sandy the local dolphin made an appearance to the delight of the children and adults alike.  As Callum said, she was saying goodbye.

Back on dry land – Galway  adventures

The wonderful National Aquarium in Salthill provided hours of investigation.  We went horse-riding in the Moycullen Riding Centre, an extremely well run establishment.  We went off on an hour’s trek with another family, all novices with little people led.  They also do terrific beach rides and longer day treks for the experienced riders. 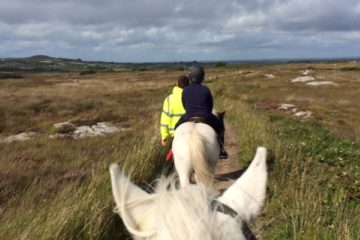